The first big test of the 40,000 nautical mile Clipper Round the World Yacht Race awaits, with around 220 everyday people setting sail from Portimão, Portugal, to race across the Atlantic Ocean to Punta del Este in Uruguay.

The race across the Atlantic is the first of six ocean crossings that form part of the eleven month Clipper 2019-20 Round the World Race, which began in London on September 1. The Clipper Race is unique in that it trains everyday people to sail around the world. And 40 percent of participants had no sailing experience before signing up for the four weeks of intensive Clipper Race training, and the crew hail from 43 different countries and all walks of life.

The race to Punta del Este is the second on the circumnavigation, with the teams on board the  eleven 70 foot yachts already having raced 1,200 nautical miles from London to Portimão. This race will see the crew battle the unpredictable conditions and heat of the Doldrums as they cross the Equator and then pick up the easterly trade winds on the way to South America.

Clipper Race Founder Sir Robin Knox-Johnston, the first person to sail solo and non-stop around the world 50 years ago, said: “This next race has some of the finest sailing you will get anywhere in the world because you are getting into the trade winds. The teams should get spinnakers up fairly quickly and they will have them up for days as they speed down past Madeira, past the Canaries, down towards the Cape Verde Islands.

“The teams have then got the dreaded Doldrums to go through then slowly the wind is going to come around and then they can head straight down for Punta del Este, hopefully at good speeds. 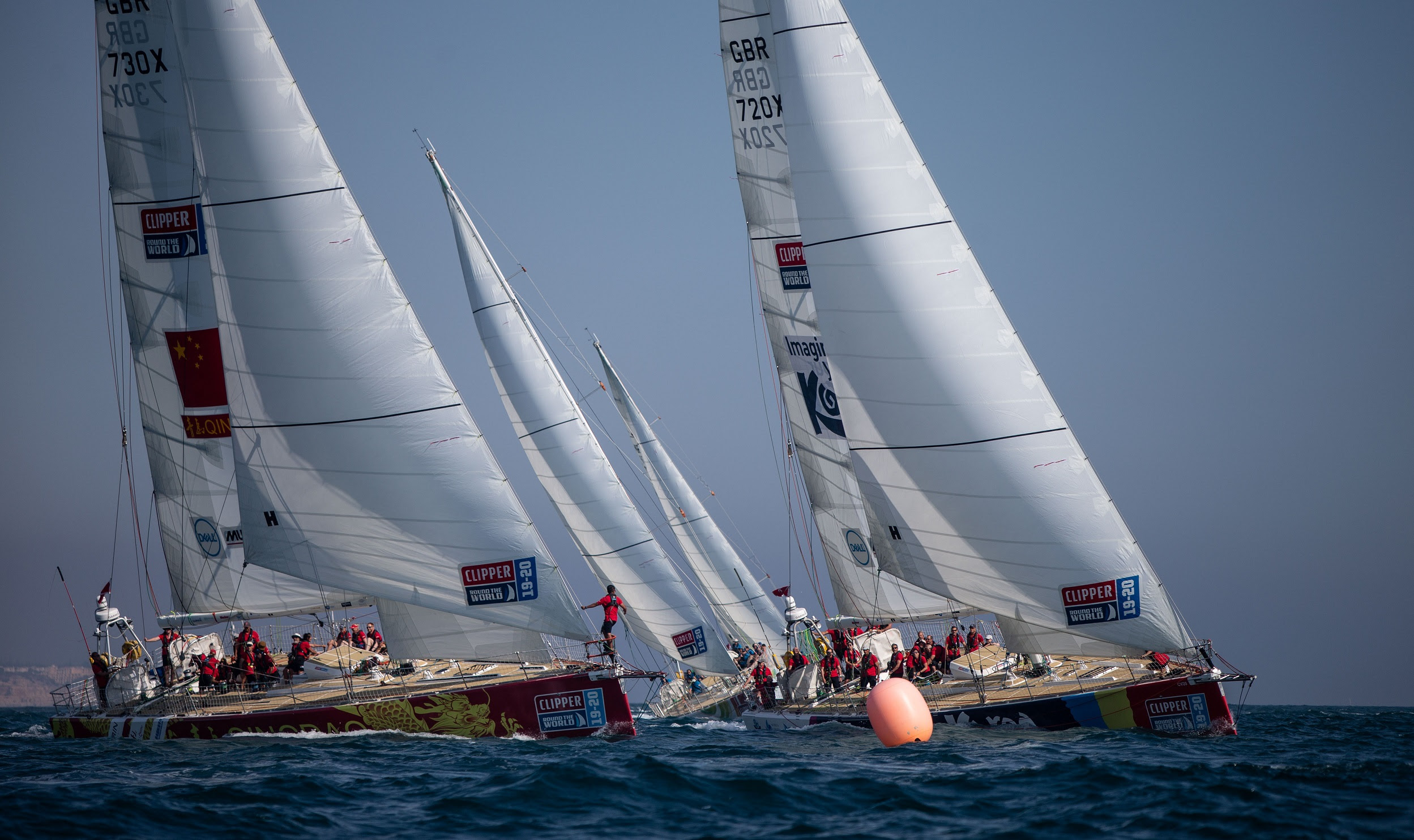 It was a frenetic start to the race. Visit Sanya, China, was the first across the start line, followed closely by Punta del Este and WTC Logistics. But by the first mark, Punta del Este was in command. The team continued to extend their advantage and had built a significant lead by the end of the course.

WTC Logistics and Qingdao were the second and third teams to finish the course, with Qingdao also playing its Joker Card for Race 2: The Commodore’s Cup. Qingdao is second in the overall standings, just two points behind Punta del Este, meaning the competition between these two teams over the next 30 days will be fascinating to watch.

Following the short course inshore race off the golden sands of Praia da Rocha, Punta del Este led the fleet as it headed into open ocean. The Punta del Este team will race towards its home port on top of the overall standings after winning both the race to Portimão and the Dell Latitude Rugged Ocean Sprint.

Punta del Este Ambassador Crew Member Dario Rodriguez, said: “In Portimao we have had some time to enjoy ourselves but mostly we have been working on the boat, to keep it in the best condition for the next race, which it is very, very important for us as we are going back home and we need to do our best. We are ready for the second race and we are confident to do our best all the way to Punta del Este.”

This is the second time the Clipper Race has visited Punta del Este, with the fleet due to arrive between Saturday 12 and Wednesday 16 October.

Ahead of Race 2: The Commodore’s Cup, Yacht Club Punta del Este Commodore Juan Etcheverrito sent a message of good luck: “We wish the Clipper Race fleet much success and fair winds for this second race. We look forward to giving you a warm welcome and fantastic stopover her in Punta!”

The Clipper Race Fleet will enjoy 12 days in Punta del Este before taking on the second ocean crossing  – the South Atlantic – to Cape Town. From Cape Town, the teams will experience the Roaring Forties in the Southern Ocean as they race across to Fremantle, Western Australia; around to the Whitsundays in East Australia, back into the Northern Hemisphere to China where teams will race to Qingdao, via Sanya and Zhuhai; across the mighty North Pacific to Seattle; to New York, via the famous Panama Canal; and then it’s a final Atlantic crossing; with stops in Bermuda and Derry-Londonderry before arriving back to London as fully proven ocean racers

Shock Stats: This was the decade’s least competitive football league!

The Complete Beginner’s Guide to Betting on Horse Races

NEW TROPHY SPRINGS UP AT AROEIRA