The sport can showcase incredible athleticism, teamwork, not to mention the thrill of a successful try.

So which tries are our favourites?

Whoever you ask, their list of top rugby tries will be different. That’s why LiveRugbyTickets.co.uk has taken to YouTube to help quantify this big question.

Using the current number of views per video*, the most watched, and therefore top 20 international rugby tries can be revealed!

Not only that, estimated earnings of each famous video have been calculated** using Influencer Marketing Hub’s YouTube Money Calculator. 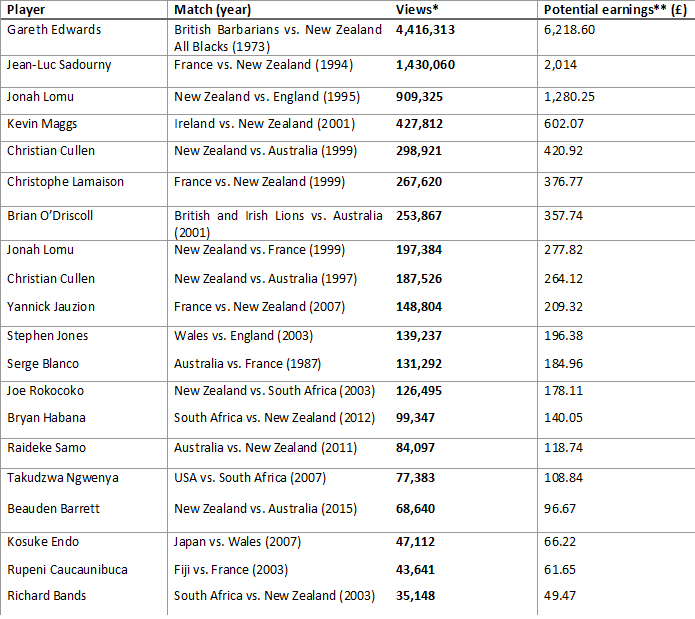 It seems the classic, older upsets receive the most love. First place goes to Gareth Edward’s finish in 1973’s Barbarians vs. the All Blacks. With 4,416,313 views, this masterpiece of a team effort could earn the uploader a whopping £6,218.60.

Feast your eyes on it below:

YouTube: The Greatest Try of All Time, 1973 All Blacks vs. Barbarians

The famous underdog try by Jean-Luc Sadourny, in France’s battle against New Zealand (1994), claims second place. The showcase has earned an impressive 1,430,060 video plays and a potential intake of £2,014.

In third, fourth and fifth place are:

Flipping the results, in 20th place is Richard Bands. While at the bottom of the results table, the South Africa hooker/prop still earned an impressive 35,148 views from his attempt, which earns the video £49.47.

The remaining spectacular tries that make the top 20 can be seen in the table above, alongside how much each video earns. *Video views taken from YouTube represent live data and are therefore subject to change. Data was extracted on 09/03/20.

**Data was obtained on 09/03/20 and correct as of this date. Influencer Marketing Hub calculates potential earnings in four ways: CPM vs. CPC; estimated gross earnings per 1,000 views; estimated earnings per subscriber; and estimated variance based on video engagement.