Martin Odegaard shone in Arsenal’s 3-3 draw with West Ham on Sunday; Real Madrid loanee has brought quality, composure and an ‘incredible’ work-rate to Mikel Arteta’s side 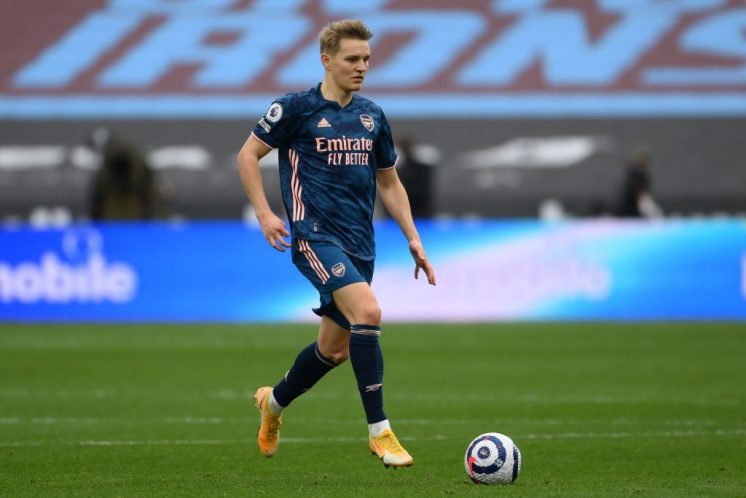 Odegaard was one of the brightest sparks for the Gunners as they salvaged a point against the Hammers after going 3-0 down in the first half at the London Stadium.

The 22-year-old brought calm amid the chaos of Sunday’s 3-3 draw with West Ham at the London Stadium.Gunner boss Mikel Arteta mentioned the importance of the Norwegian “When everyone was a little bit trembling, he gave us that composure on the ball,” said Mikel Arteta afterwards.

There were no goals or assists from him. He didn’t win the man of the match award either, with Sky Sports pundit Jamie Carragher opting for Chambers instead who recorded two assists for their first two goals of the game which also resulted in two own goals scored by Craig Dawson and Thomas Soucek in the second half to make it 2-2

t would have been deserved for Odegaard’s performance alone. He was running the game, and dictating it, especially with divine angled balls like that which put in Callum Chambers. That, naturally, was the source of the equaliser.

Odegaard again put just the right weight on a pass, allowing substitute Nicolas Pepe to lift the ball over for Alexander Lacazette to equalise in the 80th minute. 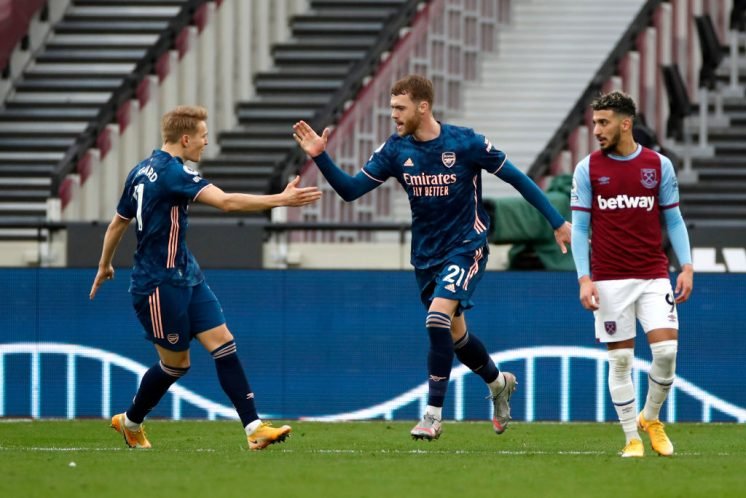 By the end, he had created more chances and completed more dribbles than anyone else on the pitch. There were 60 passes in West Ham’s half in total and 16 into their box – the second-highest total by any Arsenal player in any game all season The 22-year-old Norwegian had struggled to make an impact in Real manager Zinedine Zidane’s squad during the first half of 20/21 season.

He also spent time on loan last season at Real Sociedad, Even Eredivisie leaders Ajax were also interested so hes definable  a popular figure and catching the eyes of many clubs across Europe.

The play maker He made his debut against rivals Manchester United in the Premier League coming on as a substitute for Emile Smith Rowe in a 0–0 home draw. 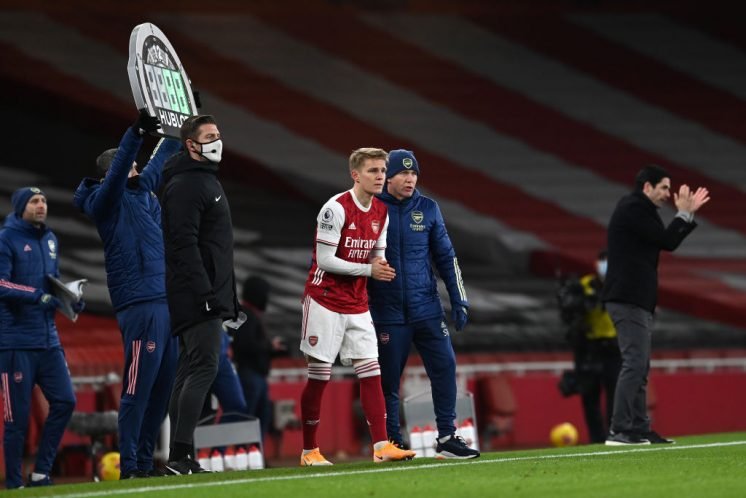 On 11 March 2021, Ødegaard scored his first goal for Arsenal with a 20-yard strike in a 3–1 away win over Olympiacos in the first leg of the  Europa League round of 16 tie. 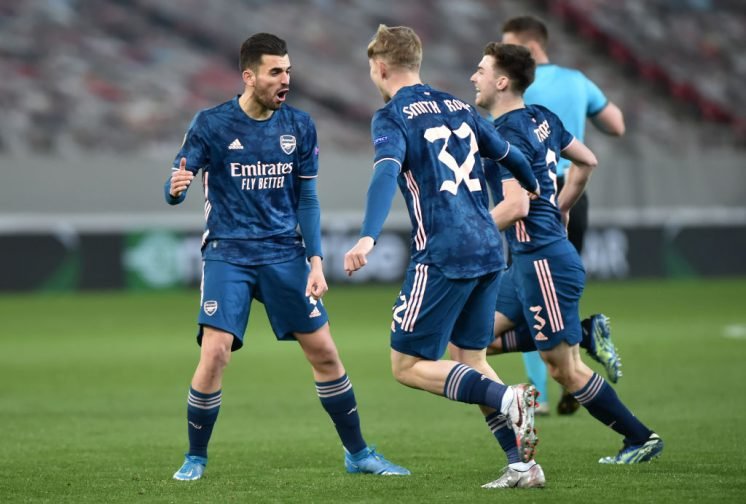 On 14 March 2021, Ødegaard scored in back to back games, picking up his first Premier League goal and it was perfect timing in a 2–1 home win over arch rivals Tottenham in the 203rd North London Derby. 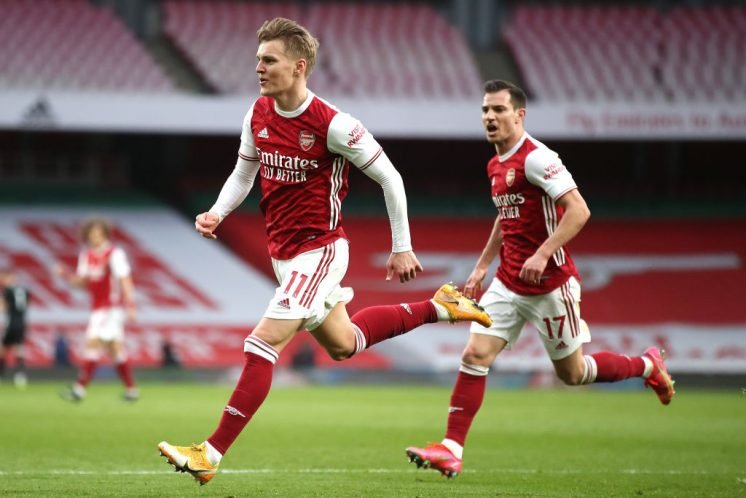 His goals against Tottenham and Olympiakos are his most talked-about contributions so far but the West Ham game was not the first in which he has orchestrated almost every attack.

Recent data also shows he has been involved in more sequences ending in a shot than any other Arsenal player since his first start in the 4-2 win over Leeds last month. “He has helped us to bind the lines together as a team,” said Arteta in conversation with Sky Sports last week.

Arsenal have benefited immensely from Odegaard arrival heir attacking performances since his arrival,for chance creation, have been better than at any other point of Arteta’s reign and so have the players around him such as Saka and Lacazette and his midfield partner Granit Xhaxa has also benefited from his arrival at the Emirates.

Odegaard already looks to have established himself at No 10 but it’s the work he does off the ball that makes him such a good fit for Arteta’s side. When asked what exactly he has brought to Arsenal, it was the first thing the manager mentioned.

“He’s given us incredible work-rate because the boy works so hard,” Arteta told Sky Sports. “He’s the right personality for the dressing room – really humble and hard-working. He gets on really well with everyone and he loves to play football, which is why we are here.”

Could he sign for Arsenal on a permanent deal?

The Times claim that the Norway playmaker is open to the idea of remaining in north London, although Real are yet to decide whether to sell him.

Reports in Spain have suggested that the cash-strapped giants would demand around £51million for Odegaard, but they could also choose to loan him out again.

While a permanent deal could prove too expensive for Arsenal, who are also counting the financial cost of the coronavirus pandemic, a fresh loan deal could be an attractive option.

Odegaard is due to return to the Bernabeu in the summer but the Arteta will definitely continue to persuade Norwegian to stay in London as he continues to get regular football and has made a huge impact.

The gunners will be hoping he stays in North London as fans are hoping to be back in stadium towards the start of 21/22 campaign. They will surely want to see the play maker live in the stands cheering him on and see the way he has adapted to the Premier League and see linkups between their attacking players Alexander Lacazette and Pierre-Emerick Aubameyang and Bukayo Saka and Nicolas Pepe.

Hopefully it is enough to convince Odegaard to return to Arsenal when his loan spell ends.  However in the present time there is quite a lot for him still to do before then.  On the evidence of his performance at the London Stadium, much more of Martin Odegaard still to enjoy.